Hey friends! Today is a fun post I am excited to share with you. Now I know what you are thinking. How are you supposed to get kids excited to go somewhere when they have no idea where they are even going? Well I will explain here.

So about 6 years ago my husband and I got one of those phone calls that you get when you put your name in one of those drawings for a prize at a fair. “Hello this is —– and I wanted to let you know that you won a 4 night, 5 day trip to Disney World” and the conversation went on to say that we needed to pay a small amount for the trip and sit through a time share meeting. So we talked about it and decided to do it. Yes this was 6 years ago! I was pregnant with my first daughter and we thought it would be so perfect. Time went on and we just always put it on the back burner and life got in the way. We extended it twice and just needed to use it. So fast forward to July of this year. The hubs and I were talking about the trip figuring out when we could actually use it. With his crazy schedule, my daughter starting Kindergarten, girl scouts and cheerleading. Long story short but it worked out that we could do it the week before she started school. So we booked it! We were stoked! We knew we wanted to surprise them but how could we get them excited without knowing? We are huge Disney fans as it is but we did these few things and I definitely think it worked…

Also let me say that my girls are little. They are 5 (almost 6) and 3(almost 4). So I was able to do these things without them knowing. I will also say that my older daughter told me she thought we may be going to Disney World but she really didn’t think it was happening. We always had talked about how it would cost a lot of money to go and how it was far away. So if your kids are older this may not work for you if you want to surprise them. But if you are telling them you can still use these fun tips!

Okay let’s get to the point here…

1. First we started with reading a new Disney story every night before bed time. We have a few books with all different Disney and Pixar stories. I feel like this helped because it refreshed them on some of the stories or movies we don’t normally watch. We did this every night at bedtime and they loved it!

2. We watched a bunch of Disney movies before we went. We would probably pick 2 a week to watch. We already knew what parks we would be visiting(Magic Kingdom and Animal Kingdom) so I kind of based my picks from some of the rides at those parks.

3. Then we decided to make “Halloween costumes”. For us this worked because Halloween was only 2 months away from when we went. I was able to play around and they wanted me to make them shirts with Toy Story sayings and bows for them. At the time we thought we would be going to Hollywood Studios with Toy Story Land but we decided not to. But this would work regardless!

4. One day we were at Walmart and were checking out the kids clothing section. We saw some really adorable Minnie Mouse dresses and outfits on clearance. So I showed the girls and they loved them! In fact my younger daughter wanted to wear the Minnie dress every day practically.

5. We also played Disney music on Pandora all the time. We love to play music in the background when the T.V is off so I would always just go to the Disney station.

6. We started talking one day about our Disney Trip years ago before the kids were around and the girls were really into it and asking about it all. So we took some pictures out and showed them. They loved looking at them and seeing who we met and what we did. Little did they know this would be them in just a few short weeks!

7. Now we were all ready to go. They knew they were going on a very special vacation but didn’t know where. We told them it was going to have a pool and they were excited with that. For the ride we grabbed some Mickey and Minnie Mouse coloring books and crayons. They still had no idea!

And off we went… to Disney World without them really knowing! And they were prepared and excited even though they had no idea what to expect in just a few hours of driving! I hope this helped you and gave you some ideas of how to get your kid(s) pumped about going somewhere even though it will all be a huge surprise!

Stay tuned on how we surprised them, how they reacted and how our trip was!!!!

free goodies straight to your inbox 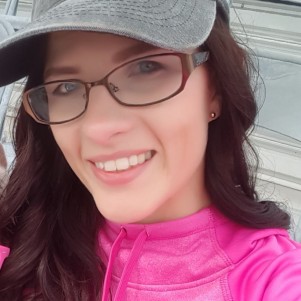 Stay up to date

The fence is almost done, some trees are planted a

Our first baby pepper is growing and it feels SO g

Wahoo! We have launched. Praying for safety for th

It has been a while since I have shared this view

Impromptu lake trip⛱☀️ These girls had so mu

Virgin pina colada and a Nicholas Sparks book in t

Stay up to date with all the latest

The fence is almost done, some trees are planted a

Our first baby pepper is growing and it feels SO g

Wahoo! We have launched. Praying for safety for th

It has been a while since I have shared this view

Impromptu lake trip⛱☀️ These girls had so mu

Virgin pina colada and a Nicholas Sparks book in t